The plants of the genus peperomia are evergreen. They are known because they are ideal for decorating interiors, thanks to its small size, which usually does not exceed 20 centimeters.

They need abundant light (though not directly) and little irrigation, and they bloom from July to October.

These are plants that are found in the wild in various parts of the world, from South America to Africa.

The most characteristic of its aspects are its leaves, very abundant and with a very marked rib.

According to the variety, the leaves have different colors: light green, dark green and even reddish tones.

The ideal is to have it in an illuminated room, where it does not give the sun directly.

Also, do not hide it in the shade or it will cost you a lot to grow.

Regarding irrigation, they need very little water, especially in winter.

Do you remember that many times we comment that more plants die due to excessive irrigation than due to lack of water? Well, that rule applies perfectly to this type of plants, with which it is easy to go.

Do not worry if they lose a leaf, it is preferable to rot their roots. If you see that it has black spots on its stems, on the bottom, it is that you are going through watering … so you have to pay attention to that aspect, especially in winter. 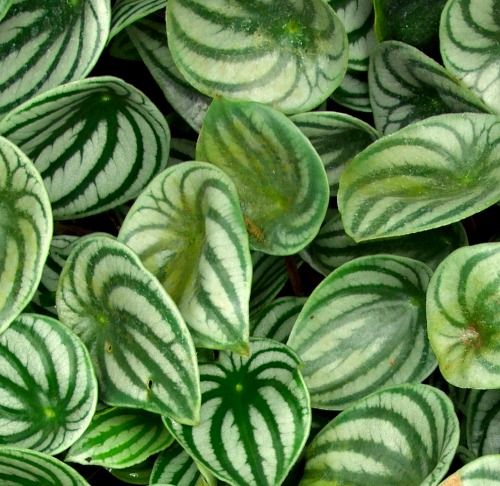 If you are looking for a resistant indoor plant, the Peperomia plants are a good option.

The Peperomia caperata , originally from Brazil and also known as emerald curl peperomia or mouse tail, is one of the preferred plants for indoor cultivation, since it is one of the species that best adapts to these conditions as it requires few cares.

It is an evergreen plant with a compact mound shape that grows to 20 or 25 centimeters high and wide, with wavy leaves in the shape of heart or oval, are large and remain wrinkled, a bright green dark, so much that they seem sparkling and the petioles retain a reddish color, which makes it an attractive ornament for its size and chromatic display. 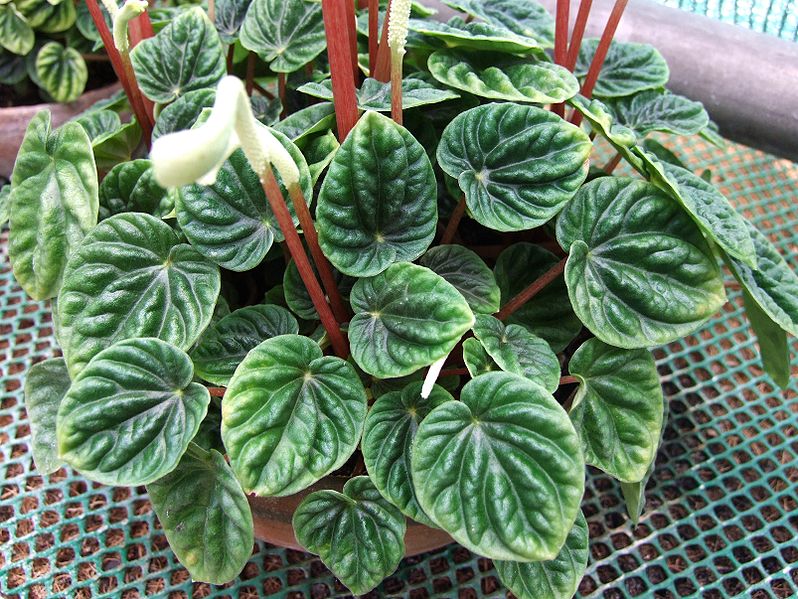 The Peperomia caperata blooms during the warm seasons of the year, producing numerous flowers gathered in spikes of white color that reach more than 10 centimeters in length and have an appearance similar to the tail of a mouse, characteristic of which one of its most common names.

This species has a minimum temperature requirement of 15ºC, which facilitates its cultivation indoors in the most temperate regions of the world.

The multiplication of Peperomia caperata can be done through leaf cuttings with or without buds that are allowed to dry before planting, or also from leaves with petioles that are placed in a sandy mixture and covered with a plastic to keep something of humidity and a temperature level between 19ºC and 21ºC.

The transplant of the young plants should be carried out during the spring, in a well-drained substrate rich in organic matter, and a mixture of mulch and peat can be used with some sand.

Specimens of this species should not be placed in places exposed to direct sunlight, as this may end up discoloring the leaves and causing them to fall.

That is why it is not necessary to spray their leaves, while watering must be moderate during the summer season with water at room temperature.

In winter, the liquid quota should be reduced, waiting for the soil to dry between irrigation and irrigation.

To water it, it is advisable to submerge the pot in the water and let the soil absorb well before removing it and letting it drain.

If Peperomia caperata is grown as an indoor plant, care should be taken to place it in a cool place, protected from drafts and sudden temperature drops.

During the winter care must be taken with heating.

This peperomia is characterized especially by the fun design of its leaves that resemble reproductions of watermelons by this curious variegation.

We are facing a very ornamental plant and cultivation in shady areas. 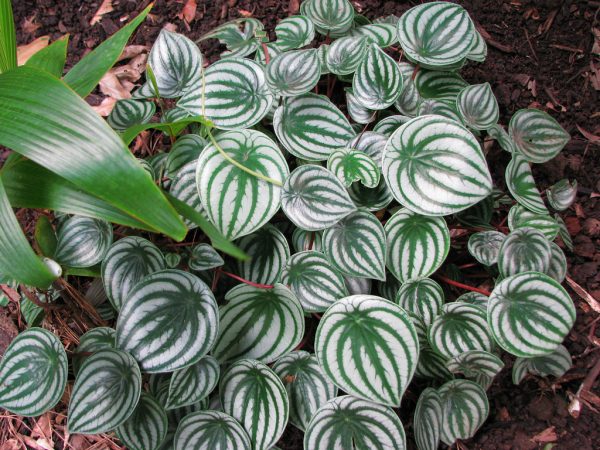 The peperonia, as it is also popularly known, is a low plant, barely 25 cm high, dense foliage and fleshy and delicate leaves.

We can also use it as a ground cover for trees underneath, provided it is not in transit areas because it is very fragile.

The leaves show an alternate list of silvery gray and green stripes on the upper part, on the lower one they are green. 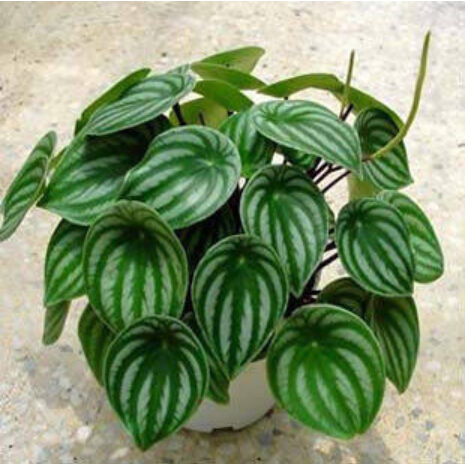 The inflorescences on the other hand are very discrete, cylindrical, green and without any aesthetic effect.

Of course it is not a plant to grow for its flowers, it has enough with those wonderful leaves that resemble watermelons.

Needs a bright environment but without direct sunlight at any time.

It can be grown indoors, provided it receives enough light, otherwise the leaves lose their distinctive variegation and become completely green.

There are some cultivars with green leaves that better support environments with very little light. 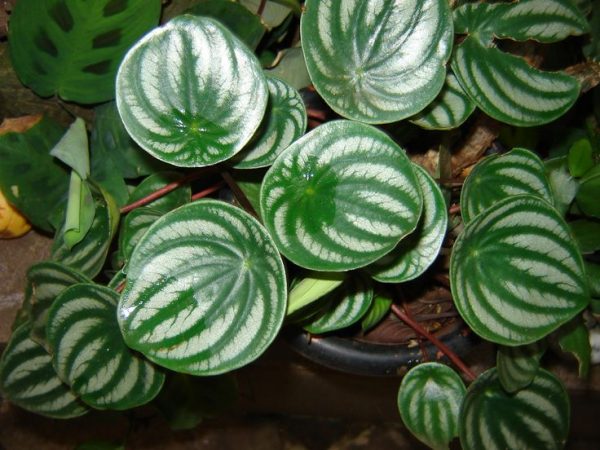 The soil should be rich and fertile and have good drainage because its roots do not tolerate excess moisture.

Irrigation must be very controlled but instead the environment must be humid, it does not hurt to pulverize its leaves with water.

In spring and summer we will water only when the substrate is dry and in winter we will reduce even the frequency of irrigation.

Being a tropical plant, originally from Brazil, it does not tolerate the cold.

The temperature should never fall below 13ºC, the optimum being a range between 24ºC and 16ºC. 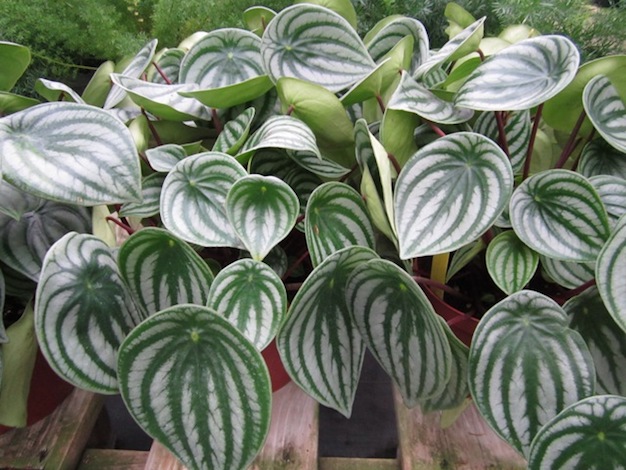 Generally, the propagation method most commonly used with Peperomia sandersii is the division of the plant, maintaining its complete structure, that is, roots, stems and leaves. It can also be reproduced by leaf cuttings or vegetative apices.

This site uses Akismet to reduce spam. Learn how your comment data is processed.

35 HOT GLUE IDEAS THAT WILL SAVE YOU THOUSANDS

Anti-Aging Foods: Go Beyond Your 40s With Health and Vitality

ABOUT US
Remarkablog is the go to place for all the information in the world you may need or which may interest you. This info base was established in late 2016 and aims to impact 100s of thousands of people's lives over the next few years with innovative and life changing content. Waste your time productively.
Contact us: [email protected]
FOLLOW US
© Copyright | Remakablog | All Rights Reserved